skip to main | skip to sidebar

The Rest Falls Away by Colleen Gleason 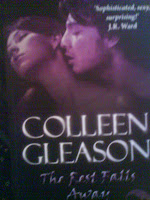 The Rest Falls Away is a historical and paranormal fusion; vampires and the Regency era of England, oh no! (or Victorian: I'm not such an expert that I can easily tell) I came to it with the expectation of encountering the historical romance style but with some vampiric action (I think I got this from seeing something the author said about her inspiration for starting the Gardella Chronicles (this being book 1 of the series). [Again: not what you'd call a romance but roughly aimed at a female audience]

Let me just say that I was very disappointed with this book in some ways.

Let's start with some positives: the author had obviously done some research and had built quite a lovely world, with references to all sorts of things including more cultures than just England (or French fashions). She had thought very carefully about how a vampire-hunting heroine could conceivably hide her identity and what aids she would need with this; lots of creativity taking advantage of the fashions dictated in that era! She had built up a cast with varied characters, symbolising and reflecting conflicts within our heroine: Victoria Gardella the Venator (Colleen's word for vampire hunter). There was a lot of exciting action.

Now, on with the negatives. First: the characters. Although they appealed, there was a unidimensionality to them all. They were sometimes convenient tropes more worthy of a television script (even the author herself went: well this is the pretty one, that's the kind one and that's the wise one with Victoria's three fairy societydebutantemothers). Characterisation was sacrificed for the action, the plot and the worldbuilding. Victoria's potential love interests followed this pattern too: well this is the irressistable badboy one, the emo one and lastly the rich one your mother wants you to marry. The way Victoria flitted apparently guiltlessly and disloyally between certain levels of intimacy them also did not sit well with me at all. Victoria's lack of reflection lead to a complete disaster with [possibleSPOILER] her marriage ; I didn't like him once he married her anyway due to his omgNAVELPIERCINGOHNOESFAINT reservations and lies about his acceptance of her secret [/SPOILER], which anyone including people fighting alongside her could predict. This is to some extent forgivable; character development and all that as long as she lives with her mistakes; she's a silly young girl and marriage might teach her a thing or two. The thing I was dreading, which happened, was the [SPOILER] killing him [/endSPOILER] major cop-out which conveniently gets rid of that relationship problem. Seeing as how the main characters are so dreadfully unexplored character-wise, I'm not going to even comment on the villains [just ow]. Also, what was the point of Gwendolyn Starcasset? She was completely irrelevant to everything. No clue. Maybe she has significance at later books.

Second: the writing style. One can tolerate a certain way of writing for a limited amount of time unless one uses it judiciously, wisely and with a certain je ne sais quoi, a certain flair not commonly exhibited among the innocent young authoresses. Indeed, it is very difficult to emulate and acheive success with such writing. One does not realise the level of -- shall we say in an understated manner -- disagreeability perhaps that arises from a constant stream inspired by, no doubt, category romance Regency style writing which may not always be appropriate for its intended audience of misses, madames and occasional gentlemen -- in quite this particular manner presented. I must protest the abuse of it, indeed, and I must also admit breathing a heavy sigh of relief when one commenced some of the action scenes and necessarily abandoned the narration style for something altogether more natural. I sometimes started hating Rockley simply because his approaching appearance heralded a regression to more of this style of chatter.

However: I'm stupidly curious over where this will end up and if the potentially good author would change her tune, especially with the teaser at the end of my edition, and about Max (the angst one; shut up I don't care, he's the only one with sense) especially. Another book in the series might make me resort to throwing books upon walls, but if I should happen accidentally across a copy of Rises the Night (book 2), who knows? Considering the originality of the concept and the combination of two immensely popular topics (Buffy meets the Regency romance), I'm not surprised at the popularity of this book. The ability to make me curious and the positives despite all the hair-pulling flaws as well is what gives it a 2.5 crosses/5 from me.